The electric double layer (EDL) formed around the charged surface of nanostructures inside a liquid influences their optical scattering strength. In our group we investigate how this minute but measurable influence can be used to visualize chemical reactions and ion transport. We experimentally demonstrate that restructuring of the EDL at the nanoscale can be detected by dark-field scattering microscopy (reported in this manuscript). Temporal and spatial characterization of the scattering signal demonstrates that the potentiodynamic optical contrast is proportional to the accumulated charge of polarisable ions at the interface and its time derivative represents the nanoscale ionic current. The material-specificity of the EDL formation is used in our work as a label-free contrast mechanism to image nanostructures and perform spatially-resolved cyclic voltametry. 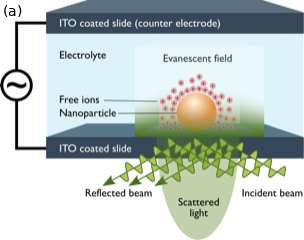 Most surfaces, nanoparticles, and biomolecules become electrically charged in contact with water. This charge will be screened by the ions solvated in water. The ions form the so-called electric double layer (EDL), which is often only a few nanometers thick. The interactions of the particle with its environment, however, will greatly depend on this cloud of ions. The processes inside the EDL determine the reactivity and assembly of these charged objects and. Understanding the EDL properties is important for a variety of biological and industrial processes, from how the kidneys function and neurons communicate to how an e-reader works.

When an external electric field is applied, the charged nanoparticle will be pulled in one direction and the shell of ions around it will be pushed in the opposite direction. The particle thus will start to drift in the liquid, due to the viscosity and interaction with the cloud of ions. It takes some time for the particle to reach a constant velocity and this time depends on how quickly the ions can diffuse around the nanoparticle and the double layer.

The fast response of the EDL is very hard to probe by only using conventional method of electrophoretic measurement. But combining electrophoresis with optical tweezers opens up a great avenue of possibilities. By studying the high-speed motion of the nanoparticle to the electric field we can study the properties of the EDL and how the surface chemistry of the nanoparticle changes these properties.

In 2015, we invented a new tracking method based on elastic light scattering by using a nanofluidic step-index silica fibers. This method can potentially enable us to track the electrophoretic mobility of single nanoparticles at kilohertz rates or higher. From the mobility, we can infer the charge of the probed objects and its interaction with the surrounding environment, which allows for monitoring the kinetics of chemical reactions on the fly. A more detailed description of this approach and some important background literature are summarized in this self journal. In 2019, the nanoCET technology was licensed to a spin-off company, Dispertech, and the feasibility study for commercialization of this technlogy recieved supported from the NWO Take-off grant 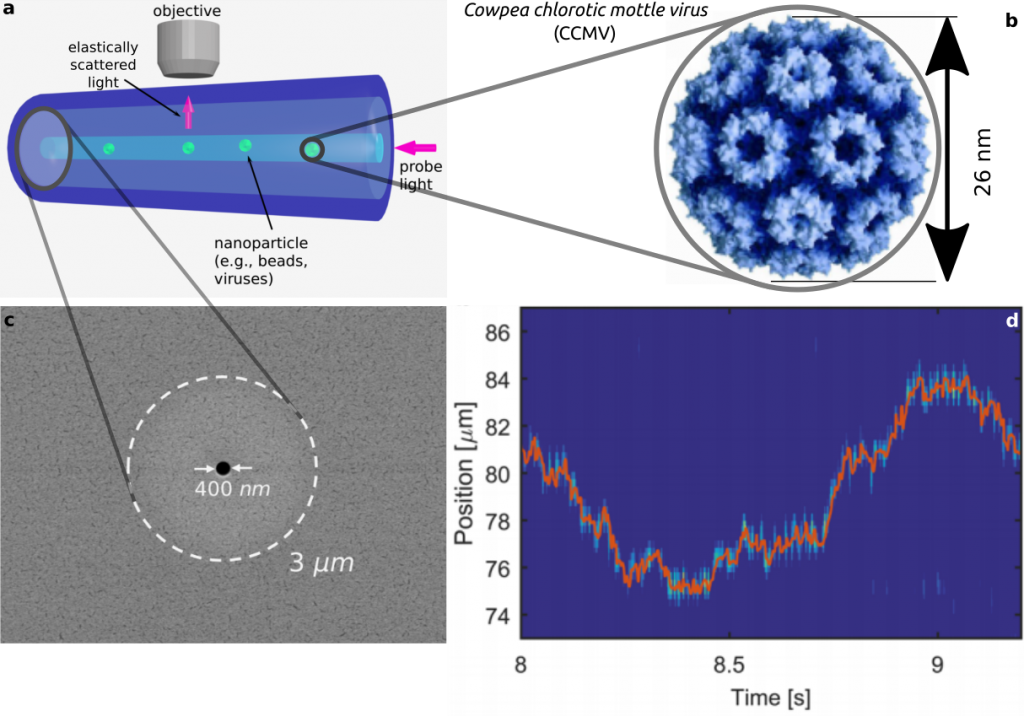 In this opto-fluidic fiber, a sub-micrometer bore is enclosed concentric to the micrometer size high index core of the fiber, which guides light in a tight single optical mode irrespective of the filling inside the bore. The particles are inserted into the hole inside an aqueous solution and scatter the guided light out of the mode while diffusing freely. By index matching the cladding on a flat glass slide, it is possible to obtain an almost isotropic point image on a camera. This efficient spatial filtering allows for detection of very small particles based on their scattering, similar to bright visualization of dust particles that pass a freely propagating laser beam. Furthermore, the small diameter of the bore assures that particles do not diffuse out of the focal plan . These advantages have enabled us to track dielectric particles smaller than 20 nm and their electrophoretic mobility at a frame rate of several kilohertz

In 2016, we were granted a ‘projectruimte’ grant to realize a proposal based on this technique: Capturing reaction kinetics on a diffusing nanoparticle.

In 2014, we proposed using organic single molecules for optical detection and positioning of individual electrons. At cryogenic conditions the optical transition linewidth of these molecules in solid host matrices is narrower than 30 MHz. Using the fact that movement of a single electron in the micrometer surrounding of such a molecule would change its transition frequency by several times its linewidth. As a result, the electron can be optically traced by following the molecular lineshift. Meanwhile, together with the group of Anders Sørensen at the Niels Bohr Institute, we devised a single photon scheme, based on this interaction, for coupling optical photons to superconducting charge qubits. The theoretical description of this scheme appeared in a Physical Review Letters in 2017.

In 2015, NWO (formerly FOM) granted support for the experimental realization of this proposal. This research is currently being pursued in Leiden in the Single-molecule Optics group of Michel Orrit.

Resonant coupling of light to single molecules in nanoguides

A few decades ago, studying single quantum emitters such as atoms, ions, or molecules was a dream, but today such investigations have become commonplace in many laboratories. Building on the fantastic ingredients of the single-emitter physics toolbox, many scientists now wish to realize mesoscopic ensembles made of carefully-arranged individual quantum entities that are interconnected by quantum messengers such as visible photons. Such a network is sometimes called a quantum web. However, the direct photonic coupling of two emitters placed at distances larger than a wavelength is usually negligible. To enhance this interaction, one might use high-finesse cavities and although the first steps have been taken, it remains a very challenging experiment with severe limitations on its prospects for scalability to many atoms. An alternative approach for efficient light-matter interaction has been shown to involve tight focusing of propagating photons, but this strategy is also difficult to scale to a large number of emitters.

At the Max-Planck Institute for the Science of Light in Erlangen, we built an efficient solid-state platform for coherent interaction between photons and single molecules. Our system consists of organic dye molecules embedded inside an organic crystal that fills a glass nanocapillary to form an optical waveguide with a sub-wavelength mode diameter. With a careful choice of materials and fabrication process, each dye molecule acts like a quantum two-level system with a very high degree of coherence. We have measured the transmission of photons through this nanoguide and have seen that each time the frequency of the laser beam matches the narrow optical transitions of the individual molecules, there is an extinction signal of a few percent. Because the interaction between each molecule and light takes place via elastic scattering, the quantum coherence is preserved.